By: Crystal
In: Words
Tagged: farmhouse, relationships, Remember this moment, self care, unfucking my habitat, work

I feel like everything is going so well, but somehow, I’m only hanging onto my life by my fingernails. I’m not suicidal or anything like that, I’m just drowning.

My partner and I are engaged, and every day since he asked, I’ve been positively joyous about it. It isn’t fading or becoming commonplace, much like our relationship in general. Other relationships have normalized themselves, but with him, more than five and a half years in, my heart still skips a beat at his smile.

Significant progress has been made on the farmhouse. I’m thinking about someday starting a blog for just the farm and farmhouse stuff, but I don’t know if I will have the energy and focus to follow through on that. More about that shortly. But we’re rebuilding the bathroom, and I’m getting closer to being able to move.

Work has gone back to almost normal. The major projects are off my desk, and I’m staying current with the ongoing ones. The problematic manager is no longer an issue. The coworker whose job I did for a month and a half, in addition to my own, has returned and is adjusting to his new normal. I got a significant raise, which helped my morale.

And yet, I’m drowning.

I live in a truly horrific house, that could have been nice if the ex had ever done anything more than talk about what we could do. I cannot bring myself to throw any money or further effort at it, so I live with it. Barely.

I have executive dysfunction when I’m there. I will sit and play games or watch a stream and think, “I should open that delivery from OnlineStore, but I haven’t run out of Product yet.” Or, “it’s been so long since I’ve watered my plants,” and I’ll get around to it three days later. (They’re all still alive, somehow.) I started packing books in October, but I’ve bought as many books as I packed since then. I can’t make myself go to bed until I’m falling asleep in my chair. I do keep up with the pets and their needs, sometimes better than my own.

I work, I go to my parents’, I take my dogs home, and usually in less than an hour, I go to my partner’s house for the rest of the evening. If I ever have a sudden burst of inspiration or energy to do something, I’m just not there to do it unless it’s right after I wake up or just before I go to sleep.

I’m in stasis there. Limbo. Purgatory. Halfway between everything. I can’t even read a book. I’m hoping against hope that once I can move, I can, well, move. I can do things I’d normally do at home. I can be myself again, if I can remember who that is.

I actually had a small burst of self-care energy lately, and started actually using the Calm app at least once a day. And I’m logging my food intake again (I stopped back in October.) I’m not counting calories, per se, but just being aware of my eating habits changes them.

Over the weekend, my partner and I took some time to walk around in the warm sunshine and discuss future plans for the place, in a fair amount of detail. I had to remind us both that I wasn’t used to people that had follow-through. We ended up sitting on an old rusty water tank by the corral, in the afternoon sun, talking through pros and cons of decisions that don’t necessarily have to be made yet. There was one of those moments that I know I’m going to remember forever, because I was so happy, and my heart was so full of love for this man. He makes me become a better version of myself. 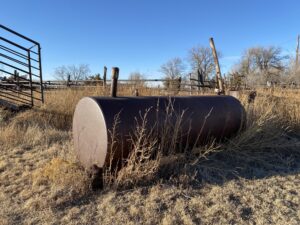 Not long at all